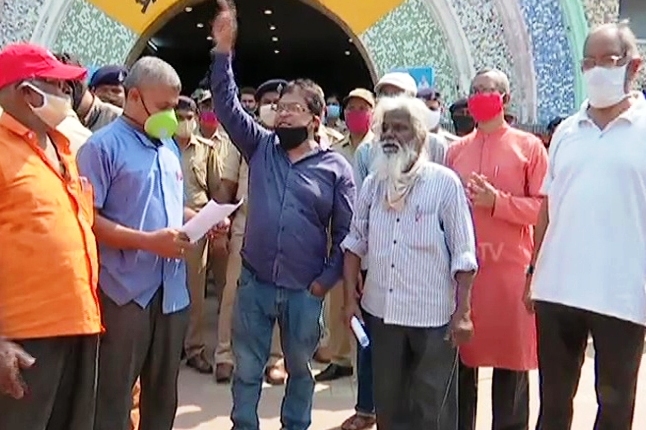 Berhampur: Demanding restoration of regular train services from Berhampur to capital city Bhubaneswar, members of the Bharat Vikas Parishad (BVP), a socio-cultural voluntary organisation, staged a protest in front of the railway station here on Monday.

They even tried to block the trains, but their attempt was foiled by the Government Railway Police (GRP) and Railway Protection Force (RPF) personnel. The outfit was denied entry into the station by the security personnel.

Train services to and from Berhampur have reportedly been put on hold since last eight months following enforcement of the lockdown.

“Passenger train services have been restored in many other cities like Bhubaneswar, Rourkela, Bolangir, Sambalpur, Cuttack and Puri despite continuous surge in cases. Even when the situation has subsided considerably in Berhampur, we don’t understand the logic behind terminating train services to the city till now,” said BVP president Surendra Panigrahi.

“Due to the disruption of train services, people of Berhampur are facing a lot of problems. They are finding it hard to go to Bhubaneswar even during emergencies as they have less alternative mediums for communication,” lamented Panigrahi demanding immediate restoration of the service in the city.

BVP members said they will stage more road blockades in the coming days if their demand is not considered.

“We had apprised the higher railway authorities but in vain. If train services are not restored in Berhampur within a week, we will intensify our protest and block trains in other parts of the state,” said Panigrahi.
OdishaTV: 10 November 2020