Dr. Suresh Chandra Gupta
Born: 16 September, 1946.   Completed his Graduation and Post Graduation from Allahabad University. He did his PhD in Geography from Kanpur University. He joined B.V.P G College Farrukhabad,  affiliated to Kanpur University as Lecturer in Geography.  He served in the college for 39 year up to 2009. Married to Smt Manorama Gupta, he is blessed with three sons –  Sanjay, Ajay and Vijay. All the sons are married living with their families and are placed in honourable jobs at Ghaziabad and one in Farrukhabad.

Shri Gupta has been active in social and cultural activities from his school days and worked in various  capacities. In 1982 he was given the responsibility to expand BVP. He started many branches in U P.  His main field of work is man making. He worked as All India Secretary for U P Region and National Convener Vikas Week. At the BVP Headquarters, he worked as National Vice President (Head Quarters) and also held additional responsibility of Editor Niti during 2016-18.  During 2018-20 he worked as   National President.

He has also been nominated as  Councillor to the Chandigarh Municipal Corporation by the UT Administrator (2017).

Shri Om Prakash Kanoongo
Born : 9th August,1949.  He is practicing Chartered Accountant (CA) in Mumbai since 1972. He has been Chairman of the Institute of Chartered Accountants of India (Western India Region), Director, Vice Chairman and later Chairman of Malad Sahakari Bank. He is a Founder member of Khandelwal Professional Association (KPA) and has been an active member on its Executive Body since the beginning (2004). He and his brothers have donated substantial amount to the KPA Education Fund in the name of their living parents “Smt. Mohini Devi and Shyam Sunder Kanoongo”.

He has been actively associated with Bharat Vikas Parishad since 1995. Starting as General Secretary of Maharashtra Coastal Prant, served as All India Secretary (Western Zone), All India Secretary (Guru Vandan Chhatra Abhinandan, a Project which was conceived and started by him), National Additional Secretary General and later as National Auditor General during 2008-16. He worked as National Finance Secretary from April, 2016 to March, 2020. He is Vikas Mitra as well as Vikas Ratna.

Shri Surinder Kumar Wadhwa
Born : 16th April, 1949. After completing his graduation in B.Sc., he was awarded LL.B. in 1975 by the Delhi University. As a renowned practicing tax lawyer, he has held the post of Secretary of the Asia’s biggest Sales Tax Bar Association (Regd.)

He initiated the idea of launching the scheme of ‘Vikas Mitra’ and thereafter the scheme of ‘Vikas Ratna’. Both these schemes have contributed significantly towards the Corpus Fund created for natural calamities and financial assistance for permanent projects. He also held the post of National Secretary General from April, 2010 to March, 2014 and National Working President from April 2014 to March 2016. Worked as National Vice President (North) during 2016-20.

Joined the Parishad at Ahmedabad (Gujarat) in the year 1981 and worked as Branch Secretary, State Secretary, National Zonal Secretary and presently working as National Vice President (West) from April, 2016 to March, 2020.

Shri Sita Ram Pareek
Born: 5th November,1951. Completed Graduation (B. Com) in the year 1971 from University of Rajasthan, Jaipur and came to Mumbai for pursing the Chartered Accountancy Course. Passed CA final examination of Institute of Chartered Accountant of India (ICAI), New Delhi in November, 1974 and settled in Mumbai.

He is on the board of various Companies and w.e.f. 6th February, 2017 has been appointed as Independent Director on the Board of Power Finance Corporation ( PFC) a Navratana Company of Government of India. He is also Board member of various Charitable Institutions including Keshav Sursti, Mumbai.

He joined as member of first Branch of BVP at Mumbai (Maharashtra) in the year 1985 inaugurated by Justice H.R. Khanna. During 1985 to 1992, worked in various capacities at branch level. In the year 1993, he was assigned the responsibility to open branches outside Mumbai. In the year 1994, the first branch outside Mumbai was opened by him at Pune (Maharashtra). During the period 1993 to 1998 he worked at Prant Level in various capacities.

Shri Pradyumna Kumar Jain
Born : 10th March 1951. After graduating in Sc. Maths, he completed CAIIB (both parts) during his service in Bank. He took V.R.S. from Bank of Baroda in 2006.

He has been active in social and cultural activities from his school days. He was President of Govt. College Baran during his studies. He was active in A.B.V.P. and also held various state level Dayitva in RSS.

He joined Bharat Vikas Parishad in year 1989 and in the same year opened its first branch in Kota. Thereafter he held various posts in Rajasthan, M.P. & Chhattisgarh where he mainly worked for organisation and expansion. He also worked in North East Region for one year and visited Assam, Tripura, Meghalaya, West Bengal, Orissa, Bihar and Jharkhand.

He has great passion for teaching and keen interest in the field of education. He was the School Correspondent of B.K High School Primary and Nursery Sections. He has been guest Faculty at All India Institute of Local Self-Govt. for the last 15 years. He was the Regional Director Bangalore Centre of  the Institute for two terms. He has presented religious discourses at number of Temples and religious places in English, Kannada and Marati attracting  large number of devotees. Recently, after being trained as Profossional Counseller, has opened a Counselling Center and also offer free counselling at Bhavasar Kshatriya Samaj twice a week to the needy persons.

His wife Smt. Kantha Doulath Rao is also an active member of BVP. 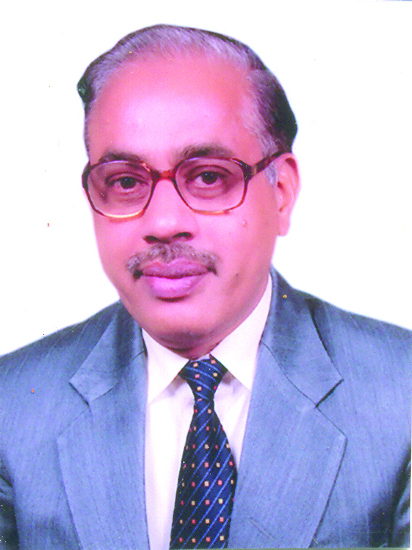 Dr. Kanhaiya Lal Gupta
Born : 25th December, 1948. He had a brilliant academic career and topped Agra University in B.Com. (1965), M.Com. (1967) and M.A. (Eco.) in 1970. He was awarded the Degree of Ph.D. in Commerce in 1978 and D.Litt. in Business Administration in 1993. He had 47 years experience to his credit of teaching Degree & P.G. classes in Commerce and Management (including Shri Ram College of Commerce, Delhi University). He also worked as Principal of S.V. College, Aligarh; Dean, Faculty of Commerce, Agra University and Director, School of Management, IIMT, Aligarh. He authored about 38 books and so far 31 research scholars have obtained the Degree of Ph.D. under his able supervision. He was also Patron of two reputed international Journals, namely ‘Asian Journal of Research in Social Science & Humanities’ and ‘Asian Journal of Research in Business Economics and Management’.

Appointed Governor of Himachal Pradesh on 8th May 2003. Laid down office of Governor on 19th July 2008.

At present engaged in social work along with practice as Senior Advocate, Supreme Court of India. All India President of Bharat Vikas Parishad, New Delhi  from April, 2012 to March 2014.  All India Vice President of Forum of Integrated National Security, Mumbai.

Prof. Satya Prakash Tiwari
Born: 30th May,1941. Prof. Satya Prakash Tiwari is UGC Emeritus Fellow at Department of Physics Panjab University, Chandigarh. He is internationally known for his contributions to Transition Metal Physics. He was born and brought up in village Barauli, District Mainpuri in Uttar Pradesh. He obtained B.Sc. degree from Agra University and M.Sc. and D. Phil. degrees, from Allahabad University.

Worked as National Working President of the Parishad from April, 2012 to March 2014.

Shri Ravindra Pal Sharma
He  graduated as Engineer in Telecommunications and did his post graduation in Business Administration. Joined Department of Telephones as ASDE and retired in 1998 as Director, Telecom (Govt. of India). Nation-wide PCO facility could become possible by his sincere efforts and farsightedness.

Dr. Rajendra Bahadur  Srivastava
Born: 6th May, 1951. M.Com (Business Administration), PhD. He has 42 years experience of teaching B.Com and M.Com students in Feroze Gandhi P.G. College and has been Principal, Sri Mahavir Singh Degree College, Rae Bareli. He has authored five books and published many research papers in national and international journals. He has been recipient of many awards during his career.

Dr.  Sinam Rajendra Singh
Born on 18th February, 1952 in a business family of Imphal. After doing schooling in Manipur, went to Pune (Maharashtra) for Pre-professional study. After that went to Kerala for Medical Study as an Indian Government Nominee. After Super Specialization in Urology, returned to Manipur in 1984 and served as a faculty in Regional Institute of Medical Sciences, Imphal till 2017 and retired as a HOD of Urology.

Can read and write Manipuri, English, Hindi and Malayalam.

Involved in various social works from student days. Supervised relief work on behalf of BVP in Odisha during the Super Cyclone in 1999 as State Gen Secretary. Since 2011, after retirement from bank, involved in honorary work for Vivekananda Kendra Kanyakumari in a hospital of Indian Oil Paradip Refinery Project at Paradip. In addition to providing health services to the company’s employees every year more than 100 health camps are organised in Rural areas under company’s CSR scheme under the supervision of V Kendra.

Graduated in Journalism & Mass Communication. After post-graduation, had a 20-year experience in the corporate field with Surya Roshni Limited in the capacity of the Deputy Managing Director. Has visited over 30+ countries for various seminars and workshops.

Has been active in social and cultural activities from his school days and worked in various capacities. Has been associated with Vidya Bharti as member of its State Working Committee.  Government of Madhya Pradesh appointed him Director in Board of Secondary Education  Madhya Pradesh, Bhopal from 2005 to 2013 ( 8 years ) and worked successfully in Executive committee and Examination committee of the Board.Was President of Indore Paper Traders Association for so many years and was All India Vice President in Federation of Paper Traders Association of India, Mumbai.

In, Bharat Vikas Parishad was founder President of Indore Main (Tilak) branch in 1993. Was founder State President and then Prantiya Patron. In the year 2018 he was nominated as National Secretary in Central Region and National Vice President  (Central)  2019-22. Presently working as Regional President-Central.