“It has no political aims or ambitions. It has no links with any political or, for that matter, with any other organization. As individuals, its members are free to hold political views of their own, so long as their views do not come into conflict with the ideals of the Parishad. But no member, howsoever high in Parishad hierarchy, can be permitted to involve the Parishad in any programme and activity motivated by political or likely to serve the political interest of any political party or individual. The lure of political power is too great to resist and some active and dynamic members are sometimes caught in its web. This not only reduces their utility to the Parishad but virtually makes them a liability, because instead of serving the organisation they want the organisation to serve them in the fulfillment of their political ambitions. Therefore, Bharat Vikas Parishad not only keeps itself strictly aloof from politics but denies political activists any significant role in the organisation.”

“I framed the Constitution of B.V.P. By visualizing the varied dimensions of this organisation, I was clear on one point that it will be an independent organisation in which the enrolment and participation of every Indian citizen will be possible and easy. I gave this clarification even to Shri Hans Raj Gupta and Shri Rajinder Singh, which was readily accepted by them. It is a fact that few workers of RSS were the members of B.V.P., but it will be irrelevant to disqualify them on this basis alone. The Parishad has its own Constitution, Oath and a Code of Conduct. The fact is that I accepted the Presidentship and the Chief Patronship of this organisation only on the condition that this organisation will be self-contained, independent and will not work under the guidance of any other organisation. The only basis of B.V.P. is Indianness.” 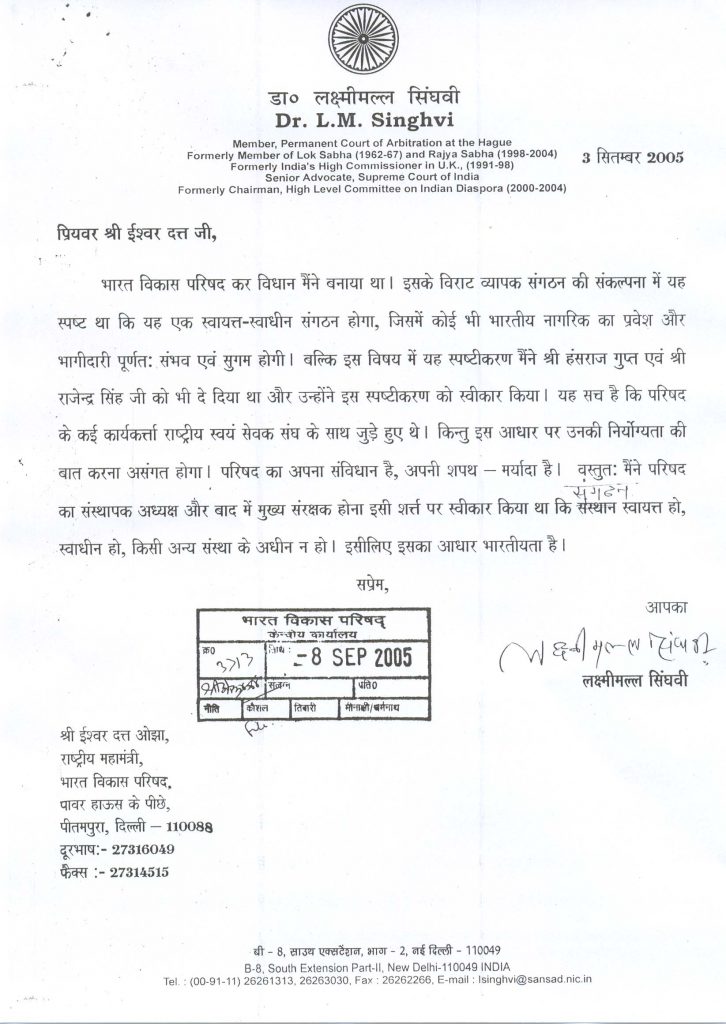