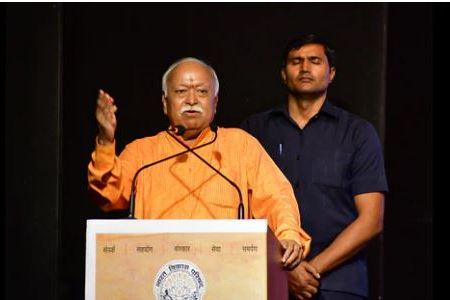 Mumbai: Rashtriya Swayamsevak Sangh (RSS) chief Mohan Bhagwat on Sunday said, “While developing India, we must take care that we do not imitate other countries and if the country does this, it cannot progress.”

Bhagwat was speaking in Mumbai to mark the centenary year of Suraj Prakash, the founder of Bharat Vikas Parishad (BVP), at Birla Matoshree Sabhagriha.

He said that the country is surging ahead and becoming more resourceful, and it makes Indians proud.

“As the country develops and progresses, Indians raise their heads with pride. Earlier, no one bothered about us. Today, we are hosting G20. Earlier, if we had told Russia not to go to war, they would have asked us to keep quiet,” Bhagwat said.

Industrialist Kumar Mangalam Birla was the guest of honour at the function.

He said, “As a nation, we are celebrating 75 years of independence. This is a momentous occasion to take stock of what we have accomplished and what we are yet to accomplish.’’

He said that, “We have been given a vision to ensure that we live in a developed India by the time we celebrate the 100th year of independence. For this, India needs a transition into a developed country by 2047. I believe that in decades ahead, India will march to its own tune, build its own growth model.”