Composed by Bankim Chandra, this song appears in the Bengali novel  Anand Math. Vande Mataram  was a source of inspiration to our countrymen in their struggle for freedom.

Officially, only first two stanzas of this song are considered to be National Song. It has an equal status with Jana-Gana-Mana (National Anthem).

However, in Parishad’s functions, complete Vande Mataram  song is sung to capture its full spirit. 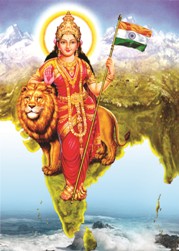