Whenever there is  calamity in any part of the country,  Bharat Vikas Parishad, as a humanitarian organization, has always come forward to provide relief and undertake various projects of reconstruction and rehabilitation. 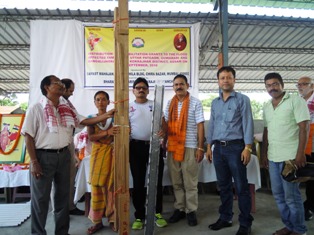 To help the victims of earthquake in Nepal, Parishad has decided to send blankets costing Rs. 20 lakhs as an immediate assistance. Shri Yash Paul Gupta, National Vice President of Bharat Vikas Parishad, flagged off truck carrying first lot of 5,000 blankets on 1st May, 2015 from Ludhiana as help for the victims of earthquake in Nepal. Second truck load of blankets followed next week.

An appeal was issued by the National President to donate generously for sufferers of earthquake in Nepal. The Central Office released a sum of Rs. 68.11 lakh for relief work in Nepal, Orissa, Tamil Nadu, Uttrakhand West, Manipur and Haryana North. 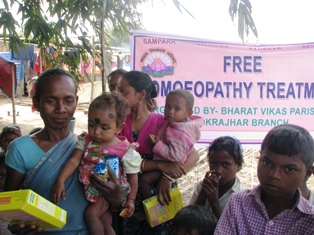 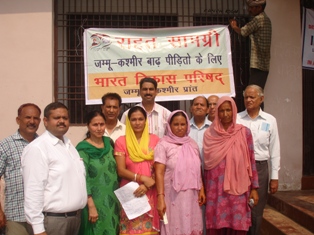 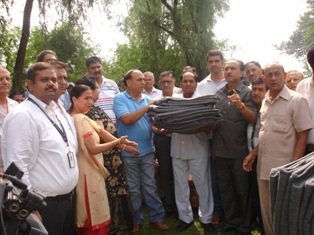 2013 - Floods and landslides in Uttrakhand

In August 2010 cloudburst triggered flash floods and mudslides in Leh causing death of hundreds of people. It rendered thousands homeless and caused extensive damage to property and infrastructure, Bharat Vikas Parishad extended timely help to the affected brethren by constructing a six room school complete with furniture and uniform and books for the students. In addition, it distributed relief material and provided financial assistance to a number of victims. 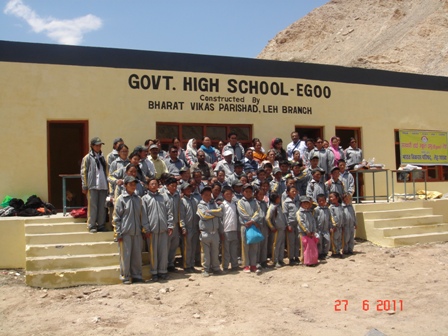 A brief of our visit to Leh – Ladakh
I, along with Shri Yash Paul Gupta, National Secy. Gram Basti Vikas, left Delhi by Air for Leh on 11th Oct. 2010. On our arrival at the Airport at 7-45 AM we were received by Shri Munish and Shri Tashi. We were advised to take rest for a couple of hours at Hotel Laserno..

At 3 pm we went to meet CEO at Civil Hospital. During the course of our discussion he wanted the Parishad to set up a Dispensary at Leh for the benefit of its people. Later it was decided to open a BVP Branch at Leh and take steps for the construction of Egoo School.

On 12th Oct we stepped out for Egoo School alongwith Dr. Anil and Dy. CEO. On our way we saw many damaged buildings and the school also that was shown in the film ‘3 Idiots’. Sindhu Darshan Palace also bore the brunt of nature. This is the same palace from where Sindhu Darshan was started by the Central Govt. under the leadership of ex. Prime Minister AB Vajpayee.

On reaching Egoo School we had a meeting with the Principal and Staff. Since the BVP offered to construct some rooms and a multipurpose hall, the necessary Bhoomi Pujan was performed by the LAMA. We handed over 10 Tables, 10 Chairs, 3 Tat Bundles, blackboard, warm undergarments for students, teachers and local residents. This gesture was highly appreciated.

Thereafter we visited two villages where seven houses were being constructed. Here we handed over a cheque for Rs. 2 Lacs and relief material i.e. blankets, cloth, solar lights etc. etc. Now it was the turn of shopkeepers whose shops were damaged. An assistance  ranging  from  Rs. 8000/-  to  Rs. 20,000/- per shop was given to them by cheque.

At 8 pm installation ceremony of a new branch of BVP at Leh was arranged attended by 15 members and some invitees. Lapel pins and BVP literature was given to members. National Secretary General apprised them about the Sanskar and Sewa activities of BVP. Three Office Bearers were nominated to run the branch.

On 13th we met the DM and discussed about relief work. We visited Solar colony where 16 marla land was allotted by the Govt. to a Society at Ladakh to start a Hospital. Bhartiya Vidya Niketan School and Hall of Fame were other important places that we visited in our last leg of journey. Much is needed to be done for our brethren of that area. BVP is committed for that venture.
– S.K. Wadhwa, National Secretary General

During 2009, states of Andhra Pradesh, Karnataka and Maharashtra were badly affected by floods. Our branches extended their best possible help to the flood affected brethren by providing food, clothes and medicines etc. Funds were also released by the Central Office to supplement the efforts of the Prants for providing relief and rehabilitation to the affected brethren.

2006: Floods in Gujarat and and Rajasthan

Our branches in Gujarat and Rajasthan did excellent work for immediate relief and rehabilitation of affected brethren.

2004: Tsunami in Southern Parts of the Country

When Tsunami struck the southern parts of the country in December, 2004, Bharat Vikas Parishad’s branches swung into action to provide medicines, food and shelters to the affected brethren in Andhra Pradesh, Kerala, Tamil Nadu and Pondicherry. The Parishad also undertook construction of community centres in five coastal villages  three in Tamil Nadu and one each in Andhra Pradesh and Kerala. In all, the Parishad’s total contribution for  exceeded rupees one crore.

A severe earthquake, which rocked Gujarat on 26th January, 2001 and left thousands dead or seriously injured. Among the injured, there were about 5,000 persons who needed artificial limbs. Bharat Vikas Parishad contributed its mite in reconstruction of devastated villages and rehabilitation of earthquake victims and providing artificial limbs to handicapped persons. A sum of Rs. 1.89 crores was contributed in cash by Bharat Vikas Parishad.

Parishad organised blood donation camps for the jawans on a large scale.

1988: Floods in Punjab and Gujarat