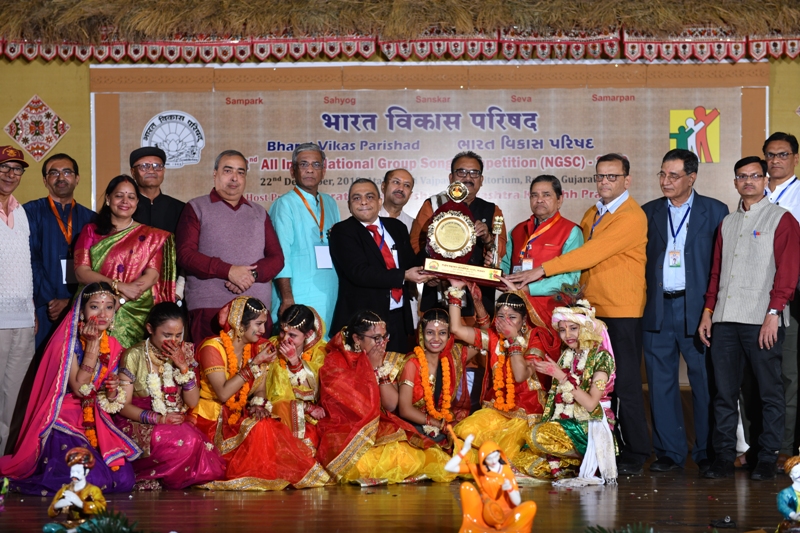 The 45th All India National Group Song Competition NGSC-2019 was held at Rajkot on 22nd December, 2019. Aptly named as “SUR VANDANA” and hosted by Bharat Vikas Parishad, Saurashtra – Kutch Prant, the event was a grand success with active participation.

From the Nine winning teams from the nine Regions of Barat Vikas Parishad, eight winning teams participated enthusiastically by rendering patriotic songs in Hindi, Sanskrit and Folk songs wearing colourful and traditional attire. Apart from the participating teams that included students, instrumentalists, teachers & few parents, a large number of Barat Vikas Parishad’s Office Bearers from Central Office and all the Regions (including the National and Regional Secretaries of Host Region) were present for the event. The entire Atalbihari Vajpai Auditorium, Rajkot wore a grand festive look with its “ House Full “ audience of nearly 750 people.

The programme started with Deep Prajwalan – the traditional lighting of the lamp by Chief Guest and other dignitaries, followed by singing of Vande Mataram. After a brief welcome address by Prant President Shri Prafulbhai Goswami, NGSC Chairman Shri D.B.Chitale talked about NGSC, our National President Shri Dr. S.C. Gupta talked about activities of BVP in general. The Co-ordinator Shri Kalpesh Shah of Host Prant proposing the vote of thanks.

The main session of Group Song Competition was conducted by National NGSC Secretary Dr. Tribhuwan Sharma and his team. All the eight teams, appearing in very colourful and traditional attire, presented their melodious patriotic songs in Hindi, Sanskrit and Folk categories.

All the winning teams received Trophy for the School/Team and individual Mementos for each student and instrumentalist. In addition, “Certification of Appreciation” was also given to all the participants and winners. Atal Rastra Chetna Puruskar is given first time to a team who has secured max. aggregate marks for (Hindi +Sanskrit ) songs and the said trophy depicts the written message of late Shri Atalji in his own hand writing and signature, which was written by him specially for one of the final competitions of NGSC held by BVP.
The mega event got concluded with rendering of National Anthem.