Bharat Vikas Parishad has instituted Utkrishtata Samman  (Excellency Award) to perpetuate the memory of Parishad’s Founder Secretary General Dr. Suraj Prakash and to propagate the ideals put forth by him  It is awarded to a person or institution who is doing outstanding work in the field of Sankar or Sewa. Nominations received from all over the country are considered by a Selection Committee.

So far four awards have been presented. Dr. L.M. Singhvi and  Justice Ramesh Chandra Lahoti headed the award committee for the first and the second year respectively. The third and fourth award were decided by the committee headed by Shri Jagmohan. The individuals and institutions honoured are as under: 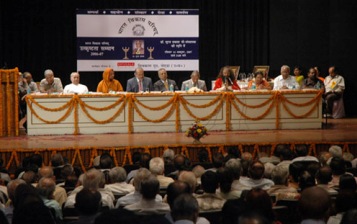 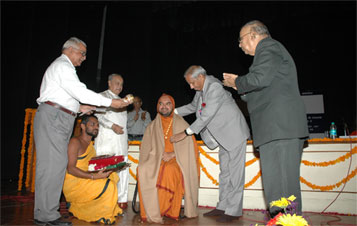 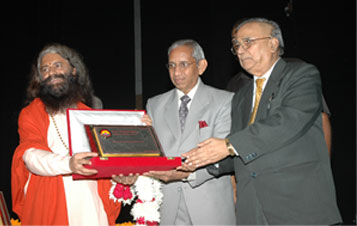 Bharat Vikas Parishad awarded its  first Utkrishtata Samman 2006-07  in the field of Sanskar to two great saints of India.  Nominations received from all over the country were considered by the Selection Committee, which was headed by (late) Dr. L.M. Singhvi.

The two saints who shared the first year’s award are His Holiness Swami Chidanand Saraswati who is the President and Spiritual Head of Parmarth Niketan, Rishikesh (Uttrakhand) and Shri Raghaveshwara Bharathi Swami, the present pontiff of Shri Ramachandrapura Math, Gokarna (Karnataka). Both the saints have contributed greatly to Bharatiya Culture and have worked ceaselessly for its propagation in Bharat and abroad.

Shri Raghveshwar Bharti Mahaswami Ji of Ramchandrapur Math Karnataka has been honoured for his excellent work in the field of cow protection, education, medical services and spiritualism. Swami Chidanand Saraswati Ji Maharaj of Parmarth Niketan Rishikesh has been selected for his excellent work in value based education, youth welfare and publications on Hinduism and other cultural and spiritual subjects. He is running 43 schools in various parts of the country imparting education with Indian values and sanskars.