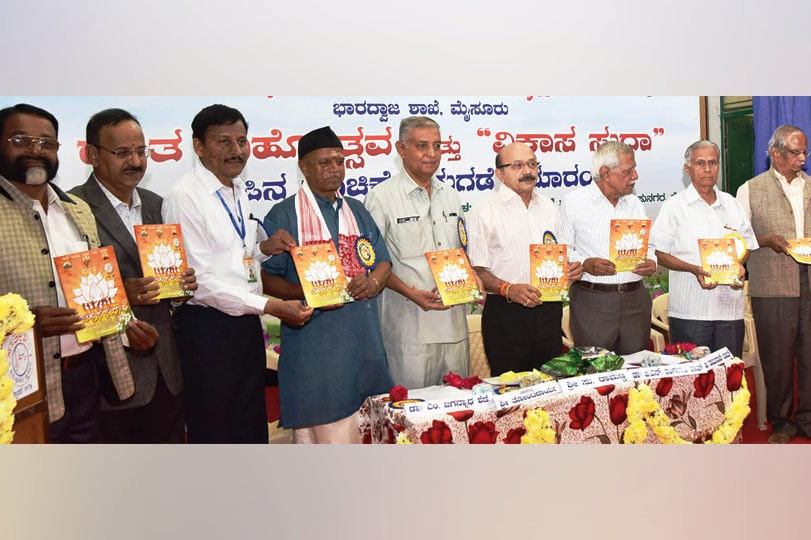 Mysore: “Bharat Vikas Parishad is a wonderful platform for those who are dedicated to the cause of nation building and service to the society. For this endeavour to be achieved, we need both intellectuals and the wealthy folk to play a key role,” opined Parishad’s former National Organising Secretary S. Ramanna.

He was speaking at a programme organised by Bharat Vikas Parishad, Bharadwaj Branch, Mysuru, to mark its Golden Jubilee celebrations at Veene Seshanna Bhavan on Adichunchanagiri Road in city yesterday.

“Established in 1963, Bharat Vikas Parishad is dedicated to the development and growth of our country in all fields of human endeavour by promoting a sense of patriotism, national unity and integrity. Parishad’s mission is to organise the elite, intellectuals and the well-to-do citizens and to motivate them to serve the nation,” Ramanna said.

Speaking about rich cultural heritage of our nation and its great minds since Vedic age, he said, “Our great minds worked towards building a healthy society. Sri Krishna, Buddha and Swami Vivekananda are some of these great personalities of our nation. Sri Krishna himself could have become a King, but he never wished to become one. We need to follow the example of Krishna, for preservation of Dharma rather than for personal gain. Similarly, Buddha’s life and teachings are nothing but a miracle. And Swami Vivekananda awakened the whole nation by implanting a sense of reverence for Bharat Maata in everybody’s heart.”

Fondly remembering magnanimous personality of Govinda Rao, father of city’s well-known industrialist and philanthropist Dr. M. Jagannath Shenoi, he said, “In 1965, the then Prime Minister Lal Bahadur Shastri had started collecting funds for ongoing war with Pakistan. He had set up National Defence Fund for the purpose. At that time, our Govinda Rao was the first person to generously donate one lakh rupees for the Defence Fund. When our Swayam Sevaks (RSS) were collecting funds and building Vivekananda Rock Memorial in Kanyakumari without any kind of help from the Government, it was, again Govinda Rao who donated one lakh rupees and helped in construction of the memorial.”