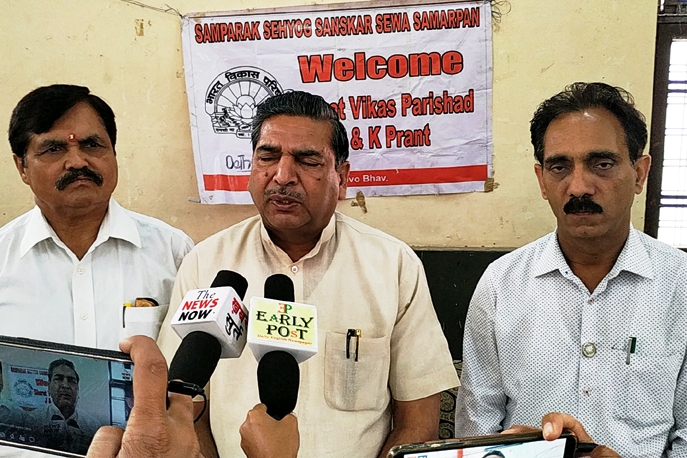 JAMMU: Bharat Vikas Parishad (BVP) has opened its two new branches, one at village Barui in Akhnoor tehsil and another at Akhnoor town, taking the tally of its branches in the State to 26.

This was disclosed today in a press conference addressed by Suresh Jain, National organizing secretary of BVP, Sushil Sharma, National secretary (organizing), Dev Raj Sharma, National secretary (Seva) at Bal Niketan, Ambphalla.
It was also revealed during the press conference that four new sewing centres for women have been opened in the State, taking the tally of such centers to 8 while one ambulance with medical equipments has been dedicated yesterday under BVP’s Seva project.

Speaking on this occasion, Suresh Jain said, “BVP is committed for inculcating ‘sanskars’ among youth through its programs in schools in which more than 20,000 children in J&K participated through Guru Vandana, Chhatra Abhinandan and Bharat Jano quiz competition every year. More than 20,000 children become part of National Group Song Competition for inculcating patriotism among youth which is a big success in this State.

“Under Seva project, BVP has broad vision viz opening of full-fledged diagnostic centre which will shortly be implemented in J&K. Two villages Rampur & Gudwal in Samba district have been so far developed as model village and work on one more village namely Kotla in Reasi district is going on and likely to be completed by two years”, Jain disclosed. He said that BVP is to be expanded throughout the State.

Sushil Sharma stressed upon the new office bearers to work selflessly for the nation and maintain coordination between the Prant and branches. New target for expansion of branches in urban as well as villages in more districts of the State was also fixed.